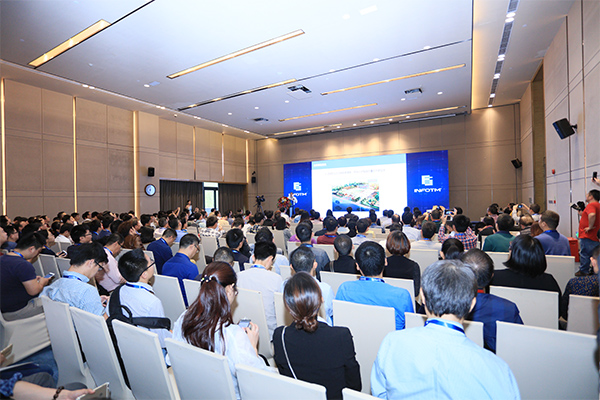 Over the past two years, artificial intelligence has become the focus of public attention and it is known as  the next forefront of Internet. Artificial intelligence + intelligent Video will also become a new engine for the  transform of many industries. Mr. Ding Qiang, the deputy General Manager of technology R&D center of  InfoTM said at the seminar, ″The purpose for this seminar is not only to provide a platform to demonstrate  intelligent video industry and explore the development trend of current artificial intelligence and visual videos,  but also for deep exchange and cooperation between enterprises in such industry to deep understand the  industry strategic layout of InfoTM as top chip designer and promote further development of China in the field  of mobile multimedia and intelligent image through new technology and diversified operation mode.″ 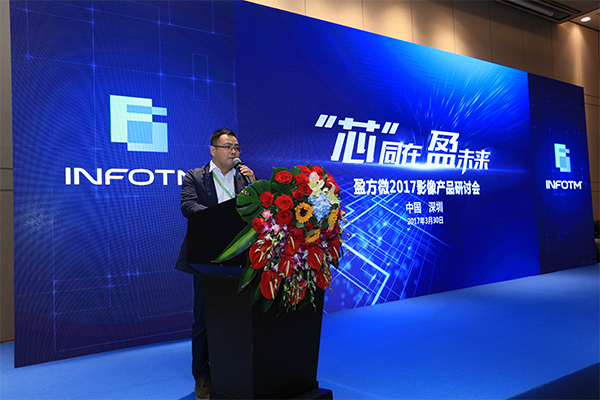 Assist New Development of the Industry      It can be seen in the keynote speech made by the sponsor, InfoTM, that the intelligent image layout of  InfoTM in 2017 will be mainly on four industries, automotive image, video surveillance, IoT Camera and pano- ramic camera and it is considered as the innovation guide in the competition of solutions for such four indus- tries.

In the keynote speech, Mr. Luo Yonghua, the deputy General Manager of market center of InfoTM, be- lieves that the new opportunities for security surveillance come from higher resolution (more than 2M) and  better video compression (H.265), among which the panorama industrial chain has been developing rapidly  to become a new industry highlight. 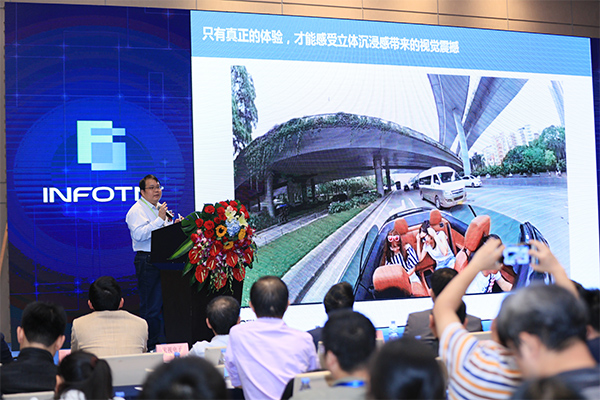 In addition, the industry is now reshaping a new way of recording from plane to panoramic. InfoTM has  never stopped the pace of progress and innovation in chip solution, from two cameras to four cameras, from  direct connection to live broadcast. InfoTM solution has covered video live broadcast/share all over the world  and has reached strategic cooperation with Letv in video cloud server.      Mr. Luo Yonghua stressed in his speech that in the field of panoramic video, InfoTM provides not only  chips but also mass production ″product package″----from design to production calibration tool, from supply  chain to ecosystem， and finally including a full set of services for product into the market. Meanwhile,  InfoTM hopes to jointly promote the development of the image industry through the construction of win-win  cooperation ecosystem.
Panoramic camera - to Create a New Live Broadcast of Sports C2C      Another blockbuster of the seminar is the strategic cooperation between Letv sports and InfoTM, who  will jointly launch a panoramic camera solution and have deep cooperation in video broadcast and share in  order to bring consumers a better panoramic camera and panoramic sharing service experience.      As the strategic partner of InfoTM, Qin Hongxin, the General Manager of Intelligent Terminal department  of Letv sports introduced that the panoramic camera equipped with a solution not only has the functions of  panoramic camera and video but also can be connected with mobile phone terminal to realize panoramic live  broadcast and one-key sharing function and thus with camera, live broadcast and social media in one. Panora- mic camera will be applied to a variety of shooting scenes, such as sports spectating, family gatherings, sights- eeing etc. and binocular fisheye lens will bring unexpected shooting results. 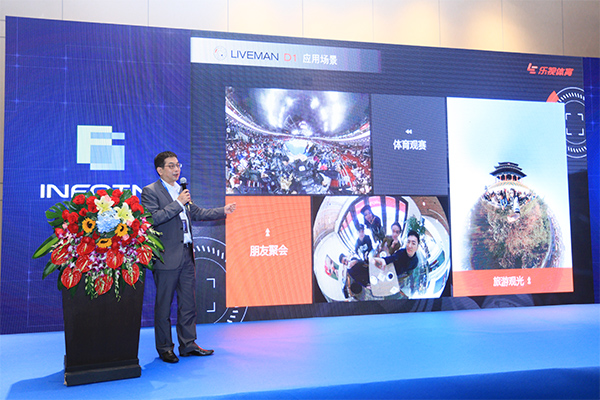 Intelligence Changes the World and Surveillance Covers Everywhere      The most popular topic in science and technology this year is artificial intelligence and virtual reality. Chen  Shaoneng, the General Manager of Macro-video Technology Co., Ltd. proposed a topic in the keynote speech,  ″What will be world be when the camera has thoughts, too?″      From the view of pragmatism, panoramic camera + artificial intelligence is a perfect match. Panorama solves  the problem of view coverage and WIFI simplifies installation. Artificial intelligence has greatly improved availabil- ity and data as well as engineering practice is the key. Twin-lens SOC provided by InfoTM has the functions of  montage and rectification. 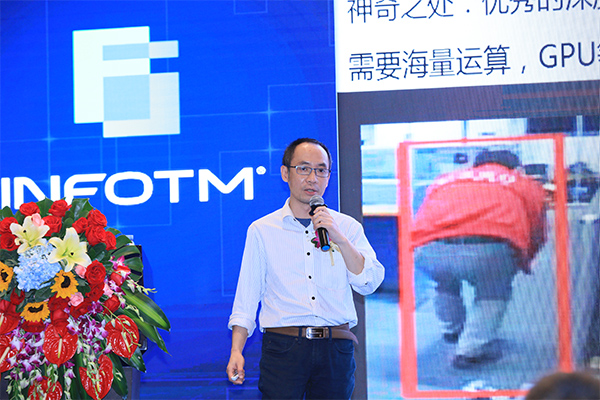 Forefront Panoramic Video      With the content evolution from texts to images and to videos (recording / live broadcast), the visibility  has become more and more strong and video service has encountered an outbreak. Greater viewing angle and  better viewing experience have resulted in the development trend of video live broadcast: panoramic live broa- dcast.      Zheng Yufeng, the General Manager of Camsgear Company believes that it is an era of sharing and an era  of win-win cooperation. With the deep fusion with the chip solution of InfoTM, the role of GAMSGEAR is to  be the conveyer of panoramic camera image to help docking camera terminal with live broadcast platform and  meanwhile to provide solution for panoramic video application to vertical field. 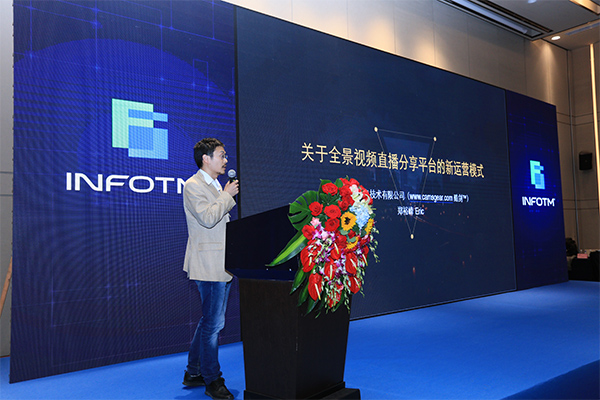 Innovation Road of Panoramic Lens Module The development of image vision can not be separated from lens, which is the core part. As an important  partner of InfoTM industry chain, Yang Wenguan, the deputy General Manager of Larpix Photoelectric mainly  introduced in the speech the panoramic camera lens and its module, mass production history of panoramic  camera lens and technical difficulties that they have ever encountered, InfoTM panoramic calibration algorithm  to promote the development of lens industrial chain and the future development of panoramic lens module.  He believes that the future and challenge of panoramic lens module will be resolution improvement, multi  montage, volume reduction and application expansion. 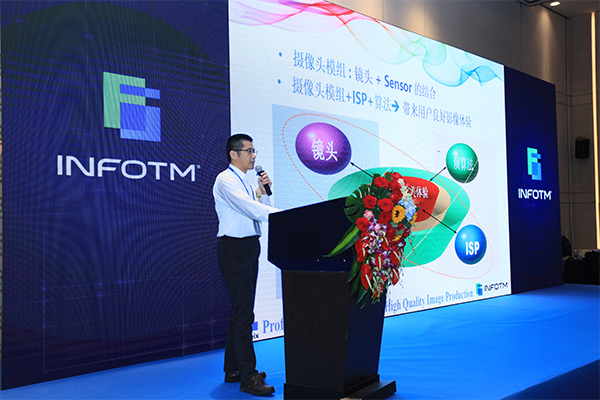 Panoramic Image, A New Fortune Gold-mine      The diversified development of consumer electronics enables the bloom of intelligent hardware, among  which the panoramic image will become a new fortune gold-mine. In the keynote speech of the seminar,  Xie Yi, the deputy General Manager of Shenzhen Chip HD , said panoramic image is changing our lives. 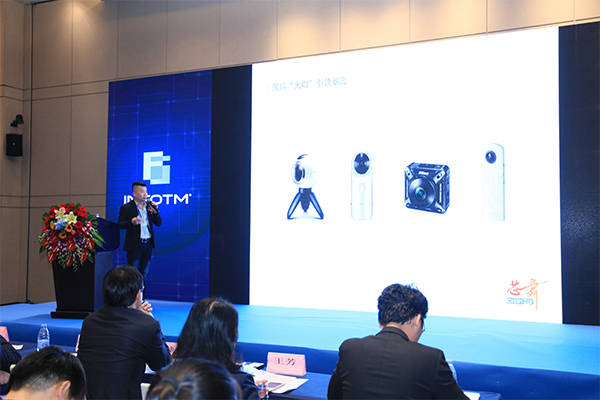 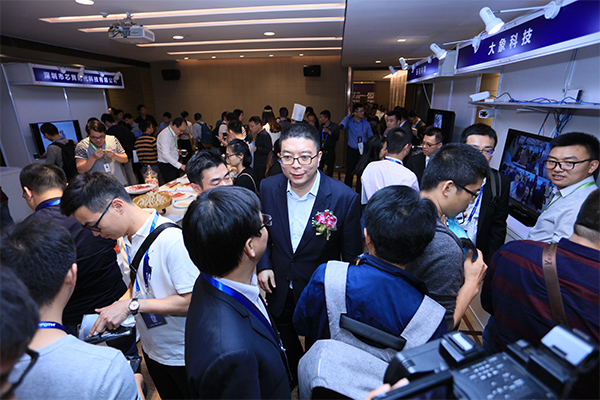 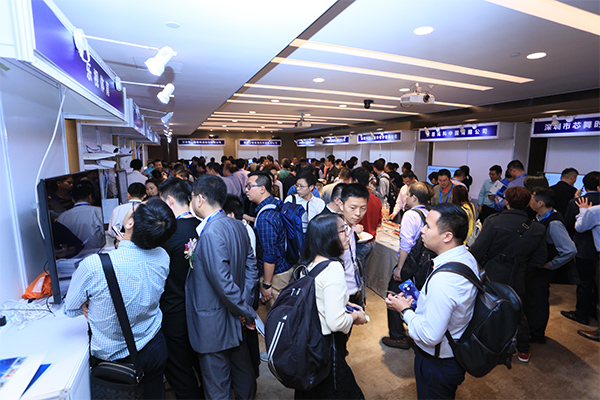 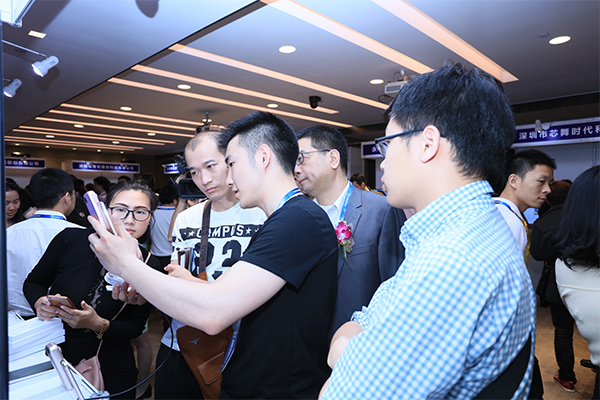 Visitors are cramming in the experience hall to fully enjoy the fun, interest and stunning panoramic exper- ience.      InfoTM and industry chain enterprises engaged in panoramic intelligent image, is not only a latest sample
for the transform and more are expected to occupy the AI+VR dominance in the new trend.